Arizona Senator John McCain. (Photo: Gunby / AP)
Senator McCain. Was this the moment? The epiphany? The realization that stoking the flames of bigotry and fear had come home to roost?

As I watched your town hall gathering, I wondered what was going through your mind when you came face to face with the incendiary results of your campaign tactics. What did you see and feel when that elderly woman said Obama was an Arab? Or the man who said he feared an Obama presidency? And all the others?

I saw your face. I watched your body language as you took the microphone and quickly distanced yourself from that one.

At that moment, did you see your reflection in the mirror of her eyes? A reflection, not of a maverick, but a pariah? Did you see the decades of American scar tissue? Birmingham? Burning crosses? The noose? Did you see that awful year in American history when Dr. King and Bobby Kennedy were assassinated, cut down in the prime of their dreams for a better America?

Did you hear the echo of Dr. King's words about being "judged not by the color of their skin, but the content of their character," and suddenly realize that it was not your opponent's character in question - but yours? Perhaps you heard the whisper of Langston Hughes when he asked, "What happens to a dream deferred ...? Maybe it just sags like a heavy load. Or does it explode?"

Did you suddenly smell the rot and fetid acrid aroma of fear and hate, the carcass of mendacious political tactics decaying at your feet? Or did you sniff the flop-sweat of your own campaign standing in a puddle of decimating poll numbers?

I watched your mouth dry up and wondered if you could taste the bitter words like "Arab," "terrorist," "treason," "kill him," - all served up on the plate of red meat politics by your campaign. Did it make you choke and want to spit out the rancid flavor of ignorance and violence? Or did you want to savor the success of the politics of personal destruction?

Did you feel the cold chill of defeat? Did your heart pound with the all-encompassing realization that you would never be president? Could you sense that the America you appeal to is stale and dying out and being replaced by the freshness of hope and tolerance and a rainbow of change?

No doubt, the media will genuflect before your image and be pushed by your campaign spinners to reanoint you as a maverick and honorable man in rising to the defense of your opponent. But your ads still sully the airwaves. Your surrogates still spew their venom. After all, this is just politics. People need to understand that. Nothing personal - it is just politics.

But here was this moment. And you know it, regardless of whether or not you were reading from cue cards or just looking down to avoid having to face the ugliness before you - you know.

And when the crowd booed as you struggled to use words about decency and honorable character to defuse the situation you created, you must have recalled the words from Proverbs, "He that troubleth his own house shall inherit the wind ..."

This is not a moment for you to be proud of in this campaign. Garnering credit for coming to the defense of Senator Obama is like an arsonist claiming heroism for saving lives after having set fire to the building in the first place.

It does not matter how the media or your advisers and consultants spin this moment because it can only reflect badly on you. If it is tossed off as politics as usual, your campaign appears shallow and less interested in what's best for America than what is best for John McCain. If it is said that there is no room for this kind of rhetoric in a presidential campaign, then you look weak and unable to control your own staff that continue to push these messages. If it is about leadership and going against the flow, then we see that a McCain presidency will be divisive and reinforce the meme of "two Americas." We have already had eight years of a divided country from the man who ran as a "Uniter not a divider."

This was a defining moment. 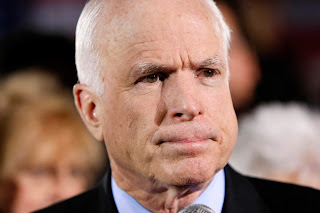