"There's still a bit of concern about whether, if you participated in these programs, you'll face in the future some change in the rules of the game, and that's causing a bit of -- a bit of concern," Geithner told The Post's Lois Romano for her continuing "Voices of Power" interview series. Private investors have expressed interest in the program, the government will work to limit their concern and he anticipates they will be "a good deal for the American taxpayer." 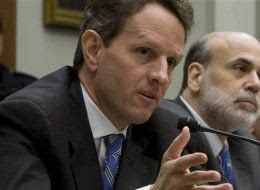 "That's the important thing to recognize," he said, "because you -- you have in this basic structure, investors putting skin into the game, taking risk, making judgments about what the price should be for these securities, and the taxpayer gets to participate in the upside in those judgments. So we think they're a good deal for the taxpayer."

Geithner also defended President Obama against this week's RNC resolution, stating that the administration "had to do exceptional things to help protect the American economy, help fix this crisis, fix this mess."

"Where we engage in these areas is with extreme reluctance and only because we think it's the necessary way to help reduce the risk of greater damage to businesses, to the basic fabric of the American economy," he said. "And I say where we do it, we'll do it only temporarily, try to make sure we get out as quickly as we can."

The government plans to divest itself of investments in the financial and automotive sectors, "As soon as we can," Geithner said.

Read more of his comments in Tuesday's editions of The Washington Post and watch video of the exchange above.