Dangerously Close to Having a Body Count

We're going to see more attempts at vigilante violence during the Age of Obama simply because the right-wing media, lead by Beck, continue to gleefully (albeit irresponsibly) stoke dangerous fires with the kind of relentlessly incendiary rhetoric that has no match in terms of modern day, mainstream use in American politics or media.

* Progressives "are sucking the blood out of the republic" and are "gonna start getting more and more violent."

* "To the day I die, I am going to be a progressive hunter."

* "[Y]ou will have to shoot me in the forehead before you take away my gun" and "before I acquiesce and be silent."

* "There is a coup going on. There is a stealing of America"; "God help us in an emergency."'

And don't forget about the unhinged response when health care reform was passed in March: "Get down on your knees and pray. Pray. It's September 11th all over again, except that we didn't have the collapsing buildings." After financial reform passed last week, Beck told his audience, "Your republic is over."

Meanwhile, Andrew Breitbart's website recently tagged Obama as the "suicide-bomber-in-chief," while the conservative Washington Times just last week published an op-ed -- by a former congressman, no less -- asserting the president poses more of a threat to America than al Qaeda.

Note that the radical right's media rhetoric is no longer even political in a partisan sense. Instead, it's purely revolutionary. It isn't, "We think taxes should be lower" or "Obama should be more hawkish overseas." It's, "There's an insidious and deadly plot afoot by Democrats and progressives to strip Americans of their freedom and this country of its greatness." Obama is now the incarnation of evil (the Antichrist?), and his driving hatred for America, as well as for democracy, runs so deep that he ran for president in order to destroy the United States from inside the Oval Office.

Rush Limbaugh: "Our country is being overthrown from within."

And this summer, the latest toxic twist to that line of attack is that Obama is destroying America on purpose in order to exact revenge from white America for the historic sin of slavery. (Think: Black Manchurian Candidate.) The GOP Noise Machine is now mixing a vile cocktail by stirring revolutionary rhetoric with hateful race-baiting.

It's impossible to argue that today's avalanche of insurrectionist rhetoric doesn't have a real world effect. Or that those on the fringes don't find comfort in seeing and hearing their worst fears legitimized on AM radio and Fox News. 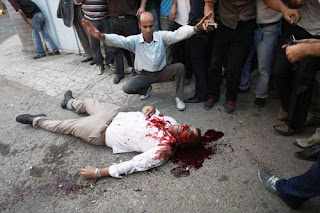