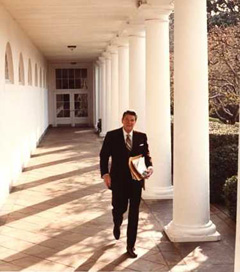 From time to time, someone under 30 will ask me, "When did this all begin, America's downward slide?" They say they've heard of a time when working people could raise a family and send the kids to college on just one parent's income (and that college in states like California and New York was almost free). That anyone who wanted a decent paying job could get one. That people only worked five days a week, eight hours a day, got the whole weekend off and had a paid vacation every summer.
That many jobs were union jobs, from baggers at the grocery store to the guy painting your house.
And this meant that no matter how "lowly" your job was you had guarantees of a pension, occasional raises, health insurance and someone to stick up for you if you were unfairly treated.
Young people have heard of this mythical time -- but it was no myth, it was real. And when they ask, "When did this all end?", I say, "It ended on this day: August 5th, 1981."
Beginning on this date, 30 years ago, Big Business and the Right Wing decided to "go for it" -- to see if they could actually destroy the middle class so that they could become richer themselves.
And they've succeeded. (...)
- August 07, 2011 No comments: